LADA NIVA: 45 YEARS ON AND OFF THE ROAD

LADA NIVA: 45 YEARS ON AND OFF THE ROAD 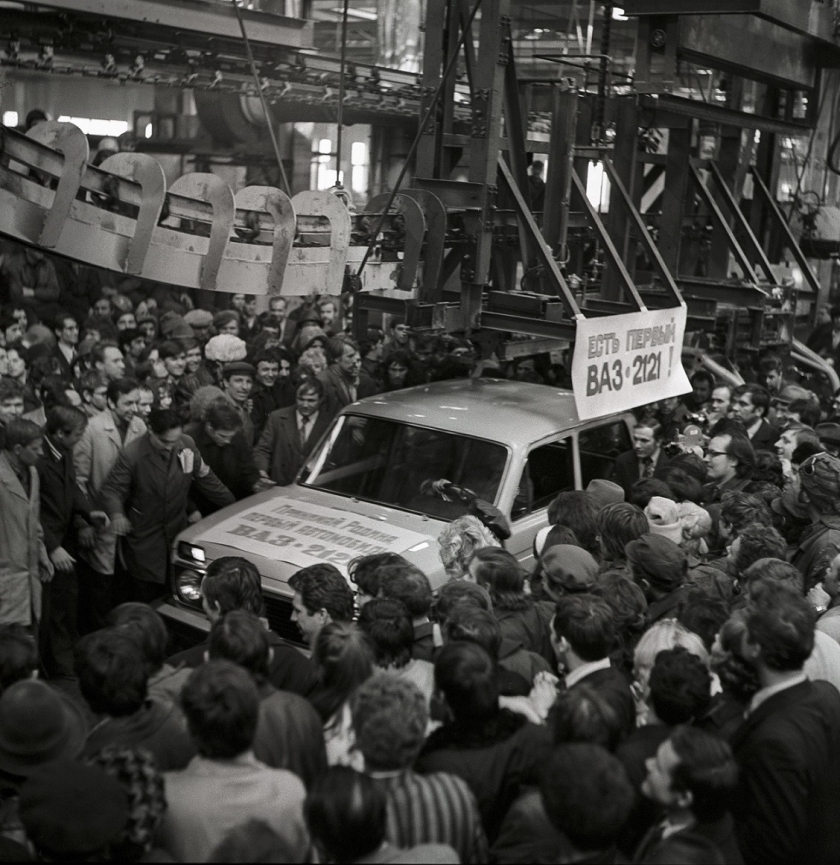 April 5, 2022
April 5 is the birthday of the VAZ-2121 Niva SUV, which is now called LADA NIVA Legend. The car has been produced for 45 years, conquered all the continents of the Earth, and in many countries is considered a symbol of the LADA brand. Over the years since the start of serial production, almost 2.5 million SUVs have been manufactured. During its glorious history, NIVA has changed significantly, but retained its DNA - a unique combination of cross-country ability and compactness, design and comfort, equipment and cost. 45 years of victories and achievements - and the history of NIVA continues.

NIVA is the first mass-produced car independently developed by specialists of the Volga Automobile Plant. A group of engineers (chief designer Vladimir Solovyov, lead designer Petr Prusov, designer Valery Semushkin, designer Lev Vikhko, lead tester Vadim Kotlyarov, etc.) created a truly unique model that opened a new page in the world history of all-wheel drive vehicles. NIVA is one of the founders of the most popular crossover class. A load-bearing body, an independent front suspension, front disc brakes - these "passenger" attributes were first used on an SUV of this class. While in the world low-speed large-volume engines were installed on all-terrain vehicles, AVTOVAZ used a high-speed engine. Permanent four-wheel drive was also new. Usually, on off-road vehicles of those times, the main drive axle was the rear, and the front one was connected at the off-road exit. On the NIVA, all-wheel drive is always involved, and the car is ready to overcome difficult sections at any time.

Name in all languages

How the name NIVA appeared is described in the book “Peter Prusov” from the “Creators of AVTOVAZ” series: “The history of this name goes back to 1974, when the designer Valery Syomushkin suggested the name ''Niva'' for filing an application for registration of an international trademark. This version also had criticism, since the name ''Niva'' in the USSR was then proudly worn by a domestic combine. ''Everyone will forget about the harvester, but the car will remain,'' objected Syomushkin. His main arguments in defense of the new name were as follows: ''Niva'' is a short euphonious word of the Russian language with positive associations; words similar in sound are in English, German, French, Spanish, Japanese, Czech, Polish; consonant with ''Niva'' words in other languages ​​denote the most peaceful things: a garden, a field, a horizon. The choice was approved. Trademark approved. So the VAZ-2121 car became known as the Niva.

It is known that already in 1973, one of the first off-road vehicles, presented for "bride" to the Kremlin, bore the name "Niva" - on the side of the car there was a corresponding inscription in large print.

At the turn of the century, the name "Niva", or rather, NIVA, was assigned to the model of the JV "GM-AVTOVAZ". Since then, the classic model has been called LADA 4x4. For 18 years, only the joint venture model was sold under the name NIVA. In 2020, the name, along with the car, was bought by AVTOVAZ. And soon, in January 2021, the name NIVA was officially returned to the classic SUV - already with the prefix Legend.

NIVA quickly gained popularity both in the USSR and abroad. The car for many years became the basis of VAZ exports. There were periods when up to 70% of NIVA was shipped abroad. The car was sold in Japan, England and other countries with left-hand traffic (for this, a right-hand drive modification was produced in the eighties). More than 700 thousand NIVA cars were exported to a hundred different countries on 5 continents, and in a number of states (Ecuador, Greece, Ukraine, Kazakhstan) the car was assembled from car kits.

Records are not off-road

NIVA is known on all continents. Even in Antarctica at the Russian Bellingshausen station, the standard version of the off-road vehicle has been successfully operated for 11 years, demonstrating reliability and adaptability to work in extreme conditions. I visited NIVA (or rather, a snow and swamp vehicle based on it) and the North Pole. In 1999, on the Tibetan plateau in the Himalayas, an expedition to NIVA under its own power took a height of 5726 m above sea level.

In the eighties, NIVA confidently entered the world sports arena - it participated in the most prestigious Paris-Dakar rally-raid. Having carried out a kind of "shooting" in 1980, NIVA already in 1981 became the bronze medalist of this most difficult marathon. Then there were new awards and victories: "gold" rally-raids "Paris - Tunisia" and "Algiers" (1981), "silver" "Dakar", first places in the rally "Algiers" and "Rally of the Pharaohs" (1982) , another Dakar Silver Cup, victories in the Atlas Rally and the Rally of the Pharaohs (1983-1984), in 1985 the Cameroon Rally, the off-road Baja Monteblanco, the Algiers Rally were won, the most difficult New Zealand trial "Valley", the Australian rally-raid "McVeigh - 1000". And in subsequent years, NIVA successfully took part in the rally raids "Paris - Beijing", "Paris - Dakar", "Sydney - Darwin", "Moscow - Lagos", "Winn Safari", "Roof of Africa" ​​and many others. In 2022, LADA NIVA entered the start of the Dakar rally, but already in the new retro nomination Dakar Classic. 4 NIVA crews took part in the race, one of the teams called RED Legend Team was officially supported by the LADA brand. The crew on the car of 1984 successfully passed all 12 stages and 7800 kilometers.

LADA NIVA Legend became the basis for many variations, some of which were produced in small batches. They have stood the test of time and expanded the circle of NIVA fans. The most famous variation is the long wheelbase five-door LADA NIVA Legend. The car is distinguished by a wheelbase increased by half a meter and the presence of five doors. On the basis of NIVA, many versions of pickups, armored cars, floating swamps, minivans, special vehicles for the police, medical service, and rescuers have been produced. There were also unique projects in the history of the car - from an army amphibian to a circus car, on which trained bears drive around the arena.

During the release, NIVA is constantly updated, and today's car is noticeably different from the first Niva. Two major upgrades were carried out in 1993 and 2009. Carefully preserving the classic style, AVTOVAZ engineers completely modernized the "stuffing" of the SUV. The car has become more dynamic, comfortable and safe. Improved handling - both on the highway and off-road.

In 2019, a new stage of renovation took place - NIVA received a redesigned, more comfortable interior. The panel has been completely updated: a new climate control unit has appeared here. Three rotary knobs and electric heater and recirculation dampers, as well as new air ducts, increase the system's efficiency and ease of use. The instrument cluster received a more readable white backlight for the speedometer, tachometer and on-board computer, which introduced an extended list of functions, including fuel consumption data. During the modernization of the SUV, special attention was paid to improving the vibroacoustic comfort of the car. New power unit mounts have been applied, which reduce the level of vibrations, and an improved package of noise and vibration isolation on the body panels.

Manufacturing processes are updated along with the NIVA design. The most significant step in this direction was made in 2017-2018, when welding, painting and car assembly were moved to more modern workshops. At the same time, production processes have changed significantly - this ensures a modern level of quality.

If in the former workshop welding was predominantly manual, today the body manufacturing technology is 54% automated. The quality and stable geometry of the body is provided by 80 robots. The painting technology is also significantly automated (4 robotic complexes operate in the workshop). Assembly is carried out on a 650-meter conveyor. The process is built according to modern methods: for example, a kit kit is pre-formed to assemble cars. On a separate hanger, the kit moves next to the assembly line: this allows the operator not to waste time searching for the right part, checking with the assembly map, and unpacking the part. The process of filling with technological liquids is also automated. Antifreeze, freon for the air conditioner, hydraulic booster oil, brake fluid are pumped in at special installations that pre-vacuum the system. This allows you to check its tightness and eliminates the occurrence of air pockets. The equipment controls both the tightening torques of the connections, and the light beam of the headlights, and the angles of the wheels.

Fans of LADA NIVA Legend are offered a whole range of SUV modifications. The classic LADA Niva Legend is available in the Classic, Luxe, Black and Urban trim levels. Depending on the configuration, cars are equipped with air conditioning, alloy wheel rims, plastic or aluminum bumpers. All cars are equipped with a permanent all-wheel drive system with the ability to connect a low gear and lock the center differential. The five-door LADA NIVA Legend is also equipped with similar systems - a car that is distinguished by an increased capacity of the cabin and trunk.

For those who prefer an even higher level of cross-country ability, LADA offers an SUV in the Bronto modification. Self-locking cross-axle differentials, reinforced chassis, tires with developed lugs are installed on the car. LADA NIVA Bronto has increased ground clearance and brutal off-road design.

For small and medium-sized businesses, a range of pickups based on LADA NIVA is provided. Semi-frame cars with spring rear suspension are designed for a load of 440-490 kg. The cargo superstructure can be carried out both in the form of an onboard platform and in the form of a van (cargo, isothermal or refrigerator).